Alan Baker and Serena Lourie founded Cartograph to pursue their passion for wine after enjoying successful careers in other fields — he in public radio and she in health care and venture capital (see their bios for the full story).

In 2008, Alan was working at the Crushpad custom-crush operation in San Francisco, making Pinot noir under his Cellar Rat Cellars label. Serena, on hiatus from her job in health care, came to Crushpad to learn the craft of winemaking and wound up working with Alan. During that first season making three wines together, they discovered that they shared two things: a similar palate and the dream of pursuing a life in winemaking.

After a long shift in the winery in November 2008, Alan and Serena sat on the curb outside Crushpad and hatched a plan to make that dream come true. Shortly thereafter, they moved to Healdsburg, toting two barrels — 50 cases — of the Pinot they'd made at Crushpad. That wine became the first release under the Cartograph label, with the front of each bottle showcasing a map of the winding road that brought the couple together to create Cartograph.

Two years later, they opened their first tasting room in a shared space, and moved in 2013 to their own space a block north of the main plaza in Healdsburg. In 2014, Cartograph was featured in the American Wine Story documentary, which showed at several film festivals and is available online via vhx.tv and Itunes. And in 2016, Cartograph purchased its first vineyard. And continuing in the theme of doing something significant every two years, they got married in 2018 and in 2020 began re-planting at their Estate vineyard.

Cartograph strives for sustainability in all aspects of their business. This reaches far beyond the sustainable practices in the vineyard but also to the winemaking process and even the business structure and employment policies. Cartograph is proud to be part of 1% for the Planet, Sonoma Sustainable, and is a certified B corp.

While Alan focuses on farming and sourcing great fruit and making the wine, Serena runs the tasting room and focuses on building the business. Cartograph now produces 1,800 cases of wine annually, focusing mainly on Pinot noir, but including aromatic whites in the style of the Alsace region of France and California sparkling.

Alan and Serena's goals: to make wines that impress with nuance and subtlety, and to show how elegant wine can be when the winemaking process involves sourcing from impeccable vineyards and using a light hand in the winery. 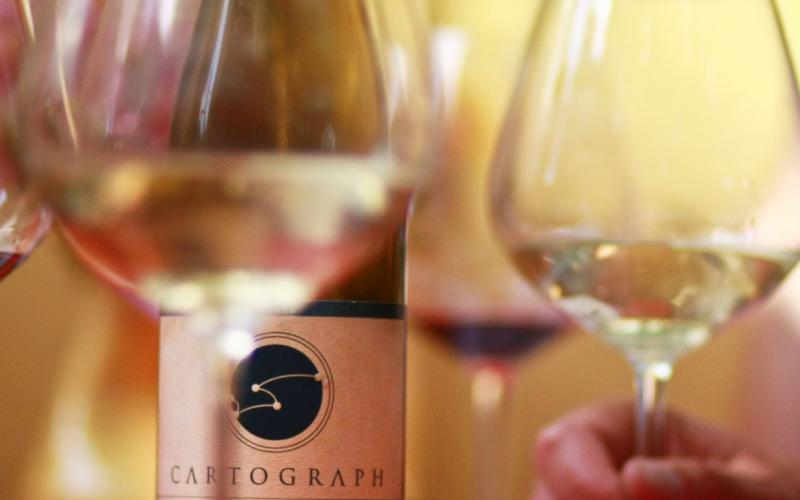 $30 per person, complimentary for Circle members

Reservations preferred. Please call to make reservations for groups of seven or more guests and to inquire about special tasting opportunities. 707-433-8270